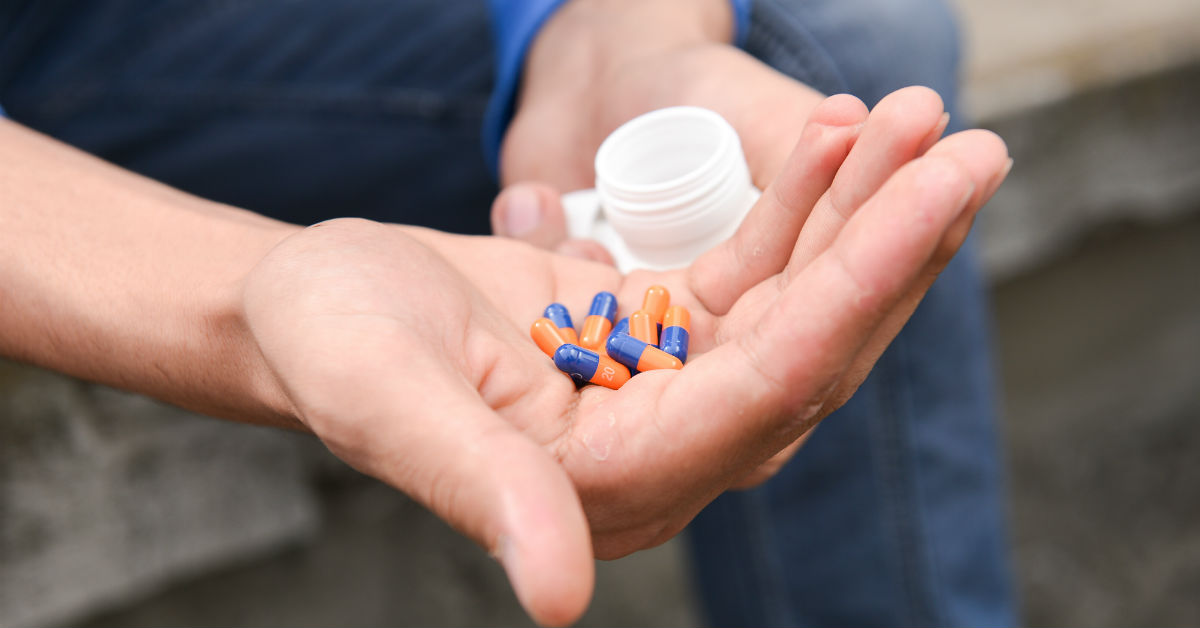 People, including teens, might decide to take a medication that wasn’t prescribed to them. They sometimes use the drug to self-medicate and eventually use it to avoid withdrawal and to get high. It’s illegal for someone to take prescription medications, also called controlled substances, if they have not been prescribed to the person. While some teens get caught up with the use of depressants or stimulants, opioids, commonly used as pain medication, are the most commonly abused prescription drug by teens.

According to a 2005 report released by NPR, about 5 percent of 12th graders admit to taking OxyContin, an opiate derivative and painkiller with a strong likelihood of addiction. From 2002 to 2005, the number of high school seniors who admitted to using the drug rose nearly 40 percent. While the medication effectively treats pain when used as directed, it affects a person much differently if he or she is not in pain, seriously increasing the risk of addiction.

According to the Center for Disease Control, by 2014, that figure grew to 25 percent of kids as young as 12 who had experimented with prescription drugs. Even more alarming is the fact that teens aren’t just buying the drug from a supplier in a rough part of town. Instead, they are obtaining access to the drug from a source much closer to home — literally. All they need to do is walk to their parent’s medicine cabinet where they will likely find an accessible supply of the drug and other similar addictive prescriptions. In fact, one of the reasons that teens struggle so much with the drug is because they think it’s safe since it’s a prescription.

In some cases, teens crush up the pills, snorting them to experience a high. One teen, who since went through a drug-treatment program, stated that the drug relaxed him and was easy to obtain. He knew at least 10 classmates selling it. However, just days after he started using it, he tried to stop. He began feeling sick if he didn’t keep using. When he tried to stop again, he realized the severity of the addiction as he went from dripping sweat to freezing cold to throwing up. In order to feed his growing addiction, he cashed in savings bonds and sold electronics and everything he had. He finally went to his parents and confessed that he needed help. His experience was common as he reported that kids across all groups — from jocks to nerds to misfits and more — were using.

As in the above case, the addiction for many is accidental. However, once the teen experiences the numbing effect of the painkiller after surgery for the removal of wisdom teeth, a sports injury or other incident, they don’t — or can’t — stop using.

Another related dynamic involves the problem of injuries for high school athletes. Thinking they are helping, parents want their teen to take powerful medications, such as OxyContin. However, they might not realize the addictive qualities of the drug, resulting in serious issues for their child. One mother shared her family tragedy. After her son fractured his collar bone, he took OxyContin and become addicted almost immediately. He graduated to heroin, which eventually claimed his life at the age of 26.

When sold on the street, the pills are expensive. Some users switch to heroin, which costs just a fraction of OxyContin.

Parental Cautions for Opioid Use

Some experts believe that teen brains process the drug differently and are not mature enough to implement effective decision-making skills. If a child definitely needs pain medication, parents can combat this issue by dealing asking a doctor for the lowest possible dosage and as few pills as possible, seeking a refill if necessary. Parents should also count the pills to ensure that the prescription is taken appropriately.

Check with your doctor to see if an over-the-counter pain medication might work just as well for your child. Be sure to address the issue of prescription drug addiction as well. While many parents address marijuana usage with kids, they fail to discuss prescription drugs.

In addition to OxyContin, painkillers fall under some of the following generic and brand names:

Additional Statistics about Opioid Use

Accidental drug overdose is the leading cause of death in the nation, with numbers steadily on the rise. In 2014, opioid overdoses claimed the lives of nearly 20,000 people, which equates to about 40 deaths per day. Furthermore, about 11,000 people died from heroin overdoses. The majority of these were male.

Look for the following signs:

Seeking Help for a Painkiller Addiction

If you suspect that your teen is using drugs, seek professional medical help as soon as possible. You can ask your general practitioner, pediatrician or a specialist if he or she can screen for drug use. A screening generally includes questions regarding substance use/abuse and related behaviors. The doctor might also take a blood or urine test.

Addiction specialists, listed in the American Society of Addiction Medicine, provide specific counsel and will help you determine if you need to send your teen to in-patient treatment. Your provider can refer you to an appropriate treatment program.

In some cases, family pressure might not motivate your child to enter treatment. While interventions, such as those made popular by some television shows, might backfire in the case of teens, the juvenile justice system often mandates treatment programs, which often effectively address addiction.